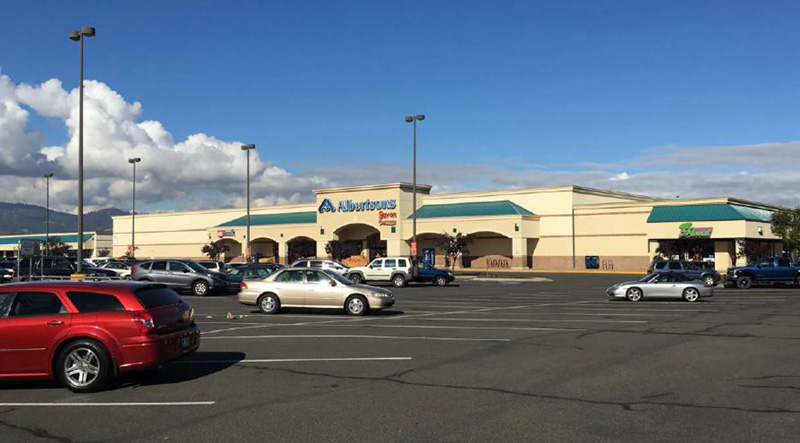 Liking what it sees north of the border, a California commercial real estate company has made its first Oregon buy.

Citivest Commercial LLC, which is based in Newport Beach, Calif., has acquired the Jackson Creek Center, a grocery-anchored, 87,847 square-foot shopping center in Medford. The sale price was nearly $5.4 million.

“Medford is experiencing an economic resurgence,” said Larry Weese, president of Citivest Commercial, in a release. “Fueled by increased confidence in the local economy, the city of Medford has invested in numerous developments and created hundreds of new jobs in the manufacturing and distribution industries.

“With a population of 210,000 people and counting, the Medford MSA is the fourth largest metropolitan area in Oregon, and is poised for continued economic growth.”

Anchored by Albertsons, the shopping center includes mix of 13 national and regional retailers in the food, entertainment, and professional service industries. Citivest noted that seven tenants offer grocery or food-related services, while other tenants offer nail care, dental care, medical/beauty services, and on-site gaming, among others.

“By acquiring this internet-resistant center, we will be able to leverage the asset’s long-term stability and resiliency to drive strong yields,” Weese said.

Originally built in 2000, the Jackson Creek Center was 97 percent occupied at acquisition. Citivest plans to renew and reposition the property, which has not been renovated since 2000.

“Ultimately, this acquisition meets all of our investment criteria: value-add opportunity and location in a high barrier-to-entry submarket with strong upside potential,” Weese said. “Further, we were able to acquire the asset well below replacement cost, at an attractive cap rate, which outpaces comparable center cap rates throughout the Pacific Northwest.”

Weese also noted that Citivest will continue shopping around in Oregon for additional properties to add to its portfolio.

X
Contact Us
We are glad that you preferred to contact us. Please fill our short form and one of our friendly team members will contact you back.
X